The Swenson Center library contains approximately 20,000 books, periodicals, and audio/visual materials related to the Swedish-American experience in North America. The library is especially strong in Swedish-American imprints, which are books published in Swedish in the United States.

We share our library catalog with the Augustana College library. Look for items marked with "Swenson Center" in the location field. These are located here.

We do not check out books to individuals. You may come view materials in our reading room. Alternatively, some titles may be requested via interlibrary loan for use in your home library. Contact your home library for assistance.

Our library is divided into several sections, some representing individual donors' personal libraries. 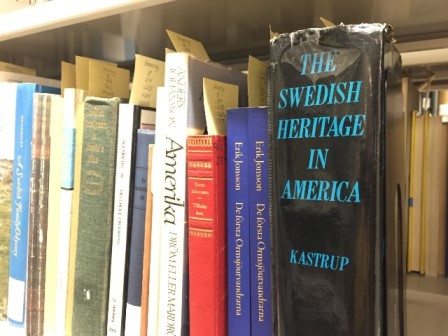 Our largest library collection documents Swedish immigration to North America and Swedish-American culture. The Center purchases all new works in the field as well as adds donations of older Swedish-American imprints to this collection. 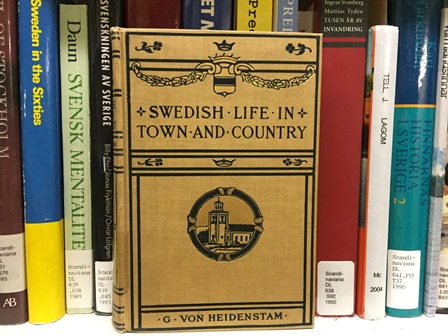 The Scandinaviana Collection is a hybrid collection of books and some serial publications dealing with background conditions and features of the Scandinavian countries, particularly Sweden.

The Nils William Olsson Collection is an exclusive collection that is strong in Swedish genealogy, local and regional history and is of particular interest to family historians and others interested in regional Swedish history and culture. 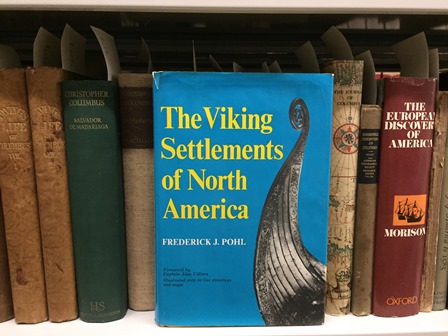 The C.W. Mortenson Collection consists of approximately 200 books on the Viking presence in North America.

This collection includes many of the standard scholarly works as well as fiction and several rare items such as C.C. Rafn's Antiquitates Americanae Sive Scriptores Septentrionales Rerum Ante-Columbianarum in America, printed in Copenhagen in 1837 and Arthur Middleton Reeves' The Finding of Wineland the Good. The History of the Icelandic Discovery of America, published in London in 1890.

The O.A. Linder Collection was donated to the Augustana College Library in the late 1930s by Oliver A. Linder and was later transferred to the Swenson Center.

Linder was a former editor of the weekly Svenska Amerikanaren Tribunen published in Chicago. It complements the Immigration Collection with its holdings of Swedish-American literature, history, fine arts, journalism and press history, and religious life.

The G.N. Swan Collection was donated to the Augustana College Library in the late 1920s by Gustav Nelson Swan of Sioux City, Iowa and was later transferred to the Swenson Center.

Swan was a key figure in Swedish-American cultural and literary circles at beginning of the 1900s.  Besides his involvement in local businesses, Augustana College, and the Augustana Synod, Swan served as the Swedish vice-consul for Sweden and Norway (1899-1905) and for Sweden (1905-1929) in Sioux City, Iowa.

Emphases of this collection include:

Also included are two pamphlet collections of over 700 separate publications from the 1850s to the 1940s on topics including World War I, banking and international monetary systems, Swedish regional brochures and travel guides, poetry and song collections, historical Sioux City souvenir publications, and Swedish-American concerns, events and landmarks.

See the pamphlet index on our Collections page.

This Dr. Larry Scott taught Scandinavian Studies at Augustana College from 1981-2013. Most of the books in this collection relate to his teaching interests, including:

Enter your email and we will keep you up to date!